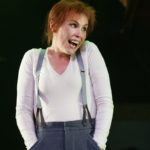 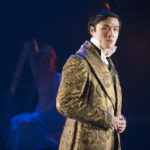 As Jette Parker Young Artists, on a normal day of cover rehearsals, we connect with the most intangible elements that the human being can ever experience: invisibility and transmutation. We will be working with some objects that you’ll see today on stage and with others that are simply invisible. We sometimes imagine that a rolled up newspaper becomes some 18th century binoculars, or that we open doors, climb up and down flights of stairs, or that we have another character or even a group of people by our side.

It’s often an ungrateful and lonely job, where we can only use our imagination in a make-believe game. But it’s this practice in knowing how to speak the truth by lying that makes the game so exciting and challenging. To me, as an audience member, there is nothing better than to be constantly challenged by a game that places demands on my imagination.

In this performance, we present what is hidden behind the rehearsal process of a young artist and decided to tear away the skin so that the skeleton can be seen. These five scenes were built with the bare minimum props combined with the utmost imagination of everyone involved. The main objective is to show the versatility and honesty that each young artist offers to the audience.

These scenes were staged to be presented outside the context of the entire opera, so that, someone who has never seen one of these pieces can easily understand the characters in these small frames of their lives.

“(…)The first half of the showcase this June comprised a group of three Mozart operas, all of which revolve around the issue of disguise and focused on how such a device, according to director, Pedro Ribeiro, “can be used to reveal a deeper truth.(…) In the second half of the performance Miss Devin came into her own as the tomboyish Marie in La fille du régiment, full of pretty sounds and lots of physical comedy. She was joined by Ji Hyun Kim whose facility and ease in the highest register is such that he could almost do with making it sound more difficult, just to impress the audience. This was a sparkling and fizzing cameo which was well directed by Pedro Ribeiro, placing the emphasis firmly on youthful exuberance. Something very special happened in the final item – the death scene of Mimì from La bohème. More accurately, several special things: When the quartet of Zhou, Jihoon Kim, Grice and Pablo Bemsch worked as an ensemble, I felt I was transported to a garret in the Latin quarter, watching four young men whose imagination and boyish energy could transcend the harsh reality of penury. It was inspiring. Then they were joined by the versatile Miss Pierard as Musetta and Miss Gaspar as Mimì. I was looking forward to hearing Mr Bemsch again. (…) I believed his grief when he flung himself on Mimì’s body. His acting was matched by that of Miss Gaspar, whose ability to float Puccini’s lines on her deathbed moved me to tears.” > Miranda Jackson | Opera Britannia

“In a word, it was simply wonderful (…) Your overall concept was admirable in setting the showcase within the wider concept of a House whose everyday work continued in the background. By creating a believable ‘lie’ the ‘truth’ of each piece came shining through in every gesture and clearly-enunciated word, establishing an immediate bond with the performers. (…) Boheme was shatteringly engrossing and (I was glad to see that I was not the only one in tears when it ended). (…) I am usually quite level-headed in my assessment of shows, but yours deserves the fullest praise…so thank you so much for the opportunity to share your vision and your gifts and those of these talented young artists. (…)”  > Clive Burton, theatre & dance reviewer | Personal Feedback

“It goes without saying that if a house of the international standing as The Royal Opera invites you to join then the rungs of the latter are being climbed big-time. This Linbury presentation was somewhat behind-the-scenes, rehearsed as a rehearsal, the opera excerpts flowing one to another and using minimal props and with a dressing-room area at the back of the stage for make-up, hair-doing and changes of costume. In the small pit a piano and a conductor, Geoffrey Paterson on this first night, Volker Krafft for the following day’s matinee. (…) a round of applause and Figaro followed immediately but without rush (…) Energy was better disposed elsewhere and ZhengZhong Zhou was a nicely lascivious Count. The comedy was subtly revealed – so much better than laying it on with a trowel. (…) Devin shone like the star (…) as Marie teasing poor old in-love Tonio, taken innocently by Ji Hyun Kim. In this duet, Cupid’s arrow finally pricks both of them. From the soufflé-like frivolity of Donizetti to the heart-rending tragedy of La bohème. And we got both barrels – Mimì’s final moments on earth, shared with Rodolfo, his fellow bohemians and the reformed Musetta (…) a thoughtful and lively imagination was evident. (…) All in all this was an enjoyable and encouraging evening which brought talent and teamwork to the fore.” > Colin Anderson | Classical Source

“In a printed note the director, Pedro Ribeiro, explained how ‘In this performance, we present what is hidden behind the rehearsal process of a Young Artist and decided to tear away the skin so that the skeleton can be seen. These five scenes were developed with the bare minimum props combined with the utmost imagination of everyone involved. The main objective is to show the versatility and honesty that each artist offers to the audience.’ Whether this was worth the effort since many in the audience were already involved with the JPYA programme or were their partners, relatives and friends, is a moot point but – by and large – it all succeeded in its aims. (…) On stage were many elements of the rehearsal process including towards the back an area for costume, wigs and make-up. There were also some monitors, spotlights, stage flats, trunks for equipment and a small amount of demountable staging. (…) All else that was needed was often mimed and left to the imagination of the audience. During the three Mozart excerpts in the first half many of the performers remained on stage as observers and people busied themselves ‘behind the scenes’, however, this did not happen again after the interval. Throughout the Mozart and later Donizetti, it suggested that Ribeiro is a ‘hands on’ director because certainly no one kept their hands off anyone else for very long! Much fun was had by all (…)” > Jim Pritchard | Seen & Heard International